LATEST NEWS AND BLOG UPDATES
FOR YOU TO READ AND CATCH UP ON. 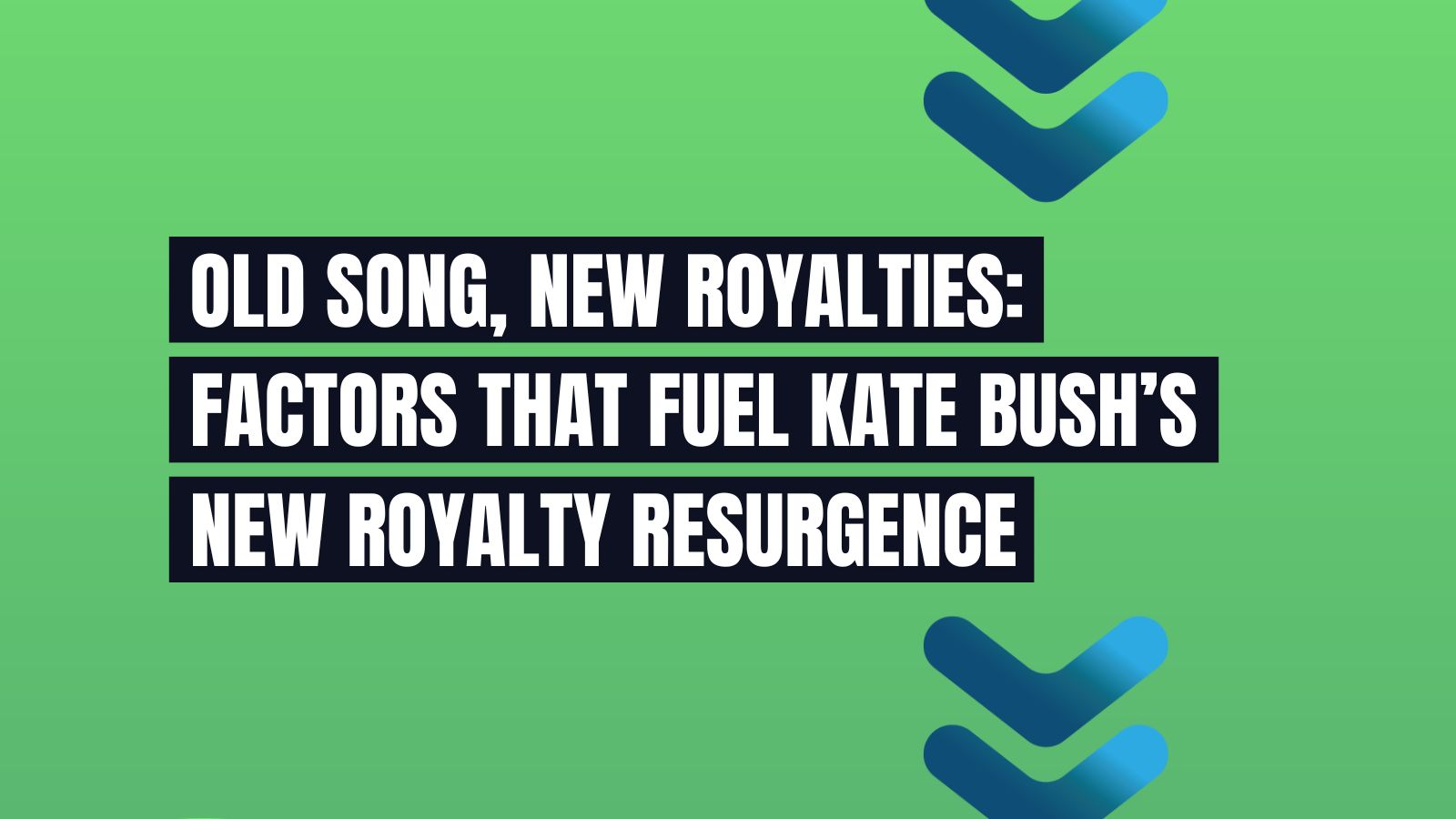 As Netflix opens Kate Bush’s music to a new generation, her classic hits are returning. They are climbing streaming charts and gaining social media buzz that wasn’t even a thing when she first hit the scene. More people are discovering her music, but where does she stand with music royalties? And does this also mean all legacy artists can have the same royalty success? Here’s our take on it.

In June and July, Kate Bush’s 1985 hit “Running Up That Hill (A Deal With God)” experienced a huge new royalties resurgence thanks to its pivotal sync in Season 4 of Netflix’s Stranger Things. The enchanted track quickly became a fan favourite and propelled to the top of the charts in many countries. But setting aside the sync earned from the Netflix show, the song was successively prevalent elsewhere too and opened her music to a whole new generation. It’s been used in 2.1 million videos on TikTok, and with the viral boost comes radio plays, the various digital streams, covers and samples. All generating that new royalty income, but who for?

Originally released by EMI in ‘85, the hit is now distributed by Warner Music Group via its Rhino UK division. But Kate Bush 100% wrote, produced, and owns the entire recording copyright of the song (amongst others), through Fish People label, owned by her company Noble and Brite Ltd. On a standard distribution deal, our best guess is that Bush is probably earning around 90% of recorded music royalties generated by the masters, or distribution fees less label share commission, or 50% or greater.

With interactive streaming services like Spotify, which pay rightsholders based on stream share through agreements with record labels or distributors for songs, these master royalties are paid to the party who owns the copyright. This could be the label if an artist is signed to a major. The artist may receive a percentage of that – after recoupables – depending on the agreement between the label and the artist. Not the roughly 90% Kate Bush, an independent artist, may receive for her distribution deal.

So, What Does This Mean?

If we concentrate on the Spotify streaming royalties for “Running Up That Hill”, something that wasn’t around when the track was originally released 37 years ago. Which got 57 million global streams in the first week of June.

And as an illustration of that one format, the rights holder can receive between $0.003 – $0.005 per stream on average. And with Kate owning the entire recording royalties, and taking that higher amount, that one track almost certainly generated upwards of £250,000 (GBP) from the recorded music royalties. In just one week. Just on Spotify. Not to mention the royalties that “Running Up That Hill” could have earned on other streaming platforms like Apple Music or Pandora.

Master recordings and music copyright are key to earning royalty income. And in the music industry, we all know that master royalty income is a big deal. The owner of master recordings will earn royalties when a song is played or reproduced, and depending on the contract terms and length, this could be either the artist or label.

When an artist signs a major record deal, they typically assign the copyright to the label to receive an advance. This financing is usually recoupable from any future record royalties until the investment is paid back. And if there is an unrecouped balance, royalties will not be credited to an artist’s account. In fact, this could still be the case 20 years later. Recently, with historic balances, we’ve seen a sea change where the majors write off these balances to create a more artist-friendly environment. But this isn’t the case for everyone.

“Running Up That Hill (A Deal With God)” is a great example that when an older track goes viral, it can boost an artist’s catalogue value. Giving them a fresh lease on life and helping them earn royalties long after they’ve stopped making new music—as long as they own the masters. But this doesn’t always mean that keeping the masters is the right decision for every legacy artist.

After “Dreams”, the 1977 song went viral, the value of Fleetwood Mac’s songs and recordings rocketed, and BMG even snapped up Mick Fleetwood’s share of future royalties in over 300 recordings. Now whenever those records are streamed or played, BMG makes money. But when an artist like Kate Bush retains ownership of her music, she does so because she wants to be able to decide how her songs will be used.

Since the release of these artists’ tracks, the music consumption landscape has changed. Whether they are selling royalty shares or keeping the rights, these cases are generating new royalty income for the different copyright owners.

Does This Royalty Success Look The Same For Everyone?

The quick answer: no.

When it comes to royalty payments, Kate Bush isn’t exactly your average case. What makes this revival so interesting to us is she’s notoriously guarded with her material. She owns her label, owns the master rights to her work, and is classed as an independent artist. All factors in receiving these royalty payments—and thus all profits—from licencing, brand deals, and other income streams. The music industry relies on royalties, and Bush’s income from owning the rights has increased substantially. But the royalties that Bush receives are not something that every artist, new or old, can expect when a song goes viral and is streamed with a sync deal.

Longevity And Pinch Of Good Advice

Copyright, ownership, and a good contract can all help to ensure the longevity of royalty income in the music industry. Kate Bush received some great advice, signed a great contract, and eventually became an independent artist owning her music. Because who could have predicted that 37 years later a new generation would discover her. That this song would be at the top of the charts surpassing Harry Styles after the manual reset, going viral on TikTok, and generating significant new royalty revenue?

To find out if you could be receiving more royalty checks for your music, subscribe to our newsletter.

Top Reasons To Outsource Your Royalties

FOR THE LATEST NEWS AND INDUSTRY UPDATES – STRAIGHT TO YOUR INBOX

Sign Up
Page load link
Manage Cookie Consent
To provide the best experiences, we use technologies like cookies to store and/or access device information. Consenting to these technologies will allow us to process data such as browsing behavior or unique IDs on this site. Not consenting or withdrawing consent, may adversely affect certain features and functions.
Manage options Manage services Manage vendors Read more about these purposes
View preferences
{title} {title} {title}
Go to Top